Today, we learn all about the wonderful Victorian Bulldog. Are they well-tempered? Are they easy to look after? We answer these questions and a whole lot more! 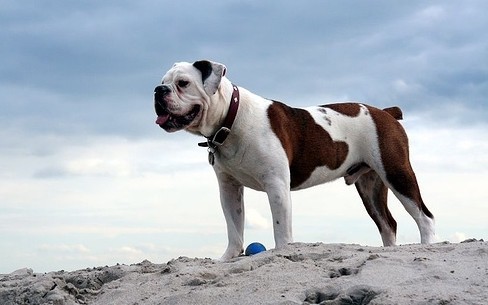 These stocky, chunky dogs are a recognized breed and are wonderful family pets.

The History of the Victorian Bulldog

Victorian Bulldogs as a breed came about because of “recreation breeding”. This is where breeders seek to resurrect lost breeds by choosing modern breeds that are as similar as possible to the original breed.

In 1985, in London, a breeder called Ken Mollet too on the challenge of trying to recreate a breed which was similar but not entirely identical to the English Bulldog.

He then crossbred them to try to breed a pet which was similar to the earlier breed with its longer muzzle, longer legs, and athletic build as well as the smaller head which was common in the Bulldogs of the early part of the 1800s.

Recommended Article: Should you feed your dog sardines? Find out in this article.

The aim was to protect the breed and to help it to procreate naturally while also improving the breathing difficulties so commonly linked with bulldog breeds.

Mollet used old artwork, photographs, and etchings to recreate the original Victorian bulldog which embodied all the characteristics that he had in mind.

Using only animals that had been registered with the Kennel Club of Great Britain, he managed to keep the breeding lines relatively pure.

The result was a breed with enduring loyalty, grace and stamina, and while they are still relatively rare, those who won a Victorian Bulldog love their pets very much due to their loyalty, athleticism and classic good looks.

The Weight, Height, and Size of Victorian Bulldogs

Male Victorian bulldogs usually are medium-sized, being slightly larger than a standard English Bulldog. They tend to be between 16-20” in height and weight somewhere between 80-80lbs.

Females are slightly shorter, standing around 15-19” in height and weighing somewhere from 60-65lbs. Of course, some pets are larger or smaller or indeed, heavier or lighter than this.

This breed has a very athletic build and a very muscular body. Their body is stretched and tall with a wider chest that is well-defined and upright.

Their shoulders are spaced widely and they have thick bones. They have a stocky and chunky appearance, whilst also looking very fit.

Recommended: Don’t miss our guide to the Silken Windhound breed next. 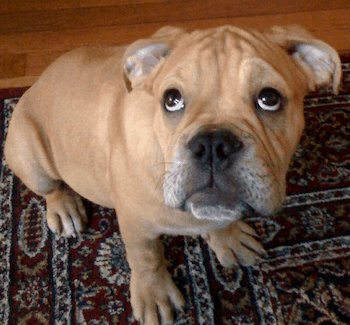 While Victorian Bulldogs look powerfully, strong and, often, quite mean. They can be wonderful family pets when raised properly.

This breed may look a little scary but in fact, they can be extremely sweet. They can have very affectionate, gentle and sweet personalities as long as they find an owner who treats them lovingly and with care and affection.

As they say, there are no bad dogs, only bad owners, and if you’re unable to offer a Victorian Bulldog plenty of affection, attention and time, you shouldn’t buy one.

Victorian Bulldogs are well known for their loyalty to their owners and, thanks to this paired with their awareness of their surroundings, they are extremely good watchdogs.

While Victorian Bulldogs can be very good with strangers on their first meeting, when someone is lurking around the property ready to potentially cause harm, they will be very protective of their home and family.

Victorian Bulldogs are clever enough to know the difference between a friendly stranger and a criminal and they are more than capable of fending off intruders. Many owners report that once their family is a loyal part of their household they are one of the best watchdog breeds out there.

Recommended: Check out our guide to the Cavachon dog next.

Are Victorian Bulldogs Good With Children?

Victorian Bulldogs are affectionate, sweet and gentle when raised properly with a loving family, and therefore they are a very good choice of pet for families with young children.

In fact, this breed will be very attentive to their family members of all ages and will protect them lovingly in all situations.

What About the Breed’s Ability to Coexist With Other Pets?

Victorian Bulldogs aren’t just safe around children at home, they can also be very good with your other pets too.

The key to this, however, is socializing and training your pet from the youngest possible age so that it will be familiar with other animals and safe around them.

When a Victorian Bulldog isn’t properly trained and socialized from puppyhood, there is a good chance that it could harm other pets.

Where Should a Victorian Bulldog Live?

Should this breed live indoors or outdoors? Well, if you live in a small home or an apartment, you’re in luck if you’d like to have a Victorian Bulldog as a pet. This breed is very happy to spend a lot of time indoors and actually thrive on living in small spaces.

This isn’t a pet which is going to need a huge amount of exercise and a large amount of outdoor space to themselves, although that doesn’t mean that you should keep your Victorian Bulldog permanently indoors with no access to the outdoor environment.

To stay fit and well, Victorian Bulldogs require exercise and physical activity every day, and while they don’t need as much heavy exercise as breeds like Lurchers or Greyhounds, they still need regular walks in the great outdoors.

However, as long as you have your own small backyard where your pet can play during the day, or as long as you can take your pet out for a short jog or walk in your local area every day, that will be just fine for the Victorian Bulldog. 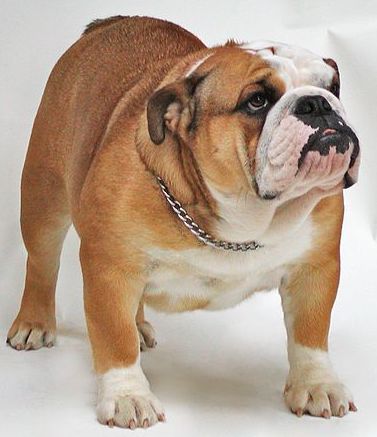 The English Bulldog plays a significant part in the making of the Victorian Bulldog.

What Kind of Weather is Best For This Breed?

Victorian Bulldogs tend to live most happily in moderate weather conditions. They struggle if the weather becomes too cold or too hot since they lack the ability to warm themselves in a very cold environment and struggle to keep themselves cool if the weather is extremely hot.

Recommended Reading: Check out the Eurasier in this guide.

Do They Have Any Known Health Problems?

If you choose a Victorian Bulldog as a pet, you’ll be relieved to know that there aren’t any major health problems associated with this breed.

Although these dogs aren’t always perfectly healthy, they aren’t at any greater risk of a specific health condition than any other dog breed.

In general, the most frequently seen health problem seen in all types of bulldog, including the Victorian Bulldog, is allergies in the skin and coat. It’s therefore very important to ensure you’re giving your pet everything they need for their coat and skin to stay in the best possible condition.

This involves giving your pet specific types of dog food designed for dogs who suffer from coat and skin conditions as well as using a specific shampoo designed to alleviate coat and skin problems.

On the upside, however, Victorian Bulldogs, unlike their English Bulldog cousins, have a much lower chance of suffering from some common bulldog complaints like breathing problems, high risk of cancer and heart disease.

Victorian Bulldogs are well known for their snoring, however, and this can be an irritating problem if your furry friend will be sharing your bedroom! If you’re easily disturbed during the night or find snoring irritating, you should think about where your pet will sleep before bringing your new family member home.

You can expect your Victorian Bulldog to have a lifespan of around 10 to 13 years so long as they are given all the right affection, love and care that they deserve.

Caring For Your Victorian Bulldog

Knowing how to care for your Victorian Bulldog is very important if you’re considering getting this breed of dog. Some dog breeds require a lot more care and attention to stay in top condition than others, however, the Victorian Bulldog isn’t a high maintenance pet.

As they don’t shed heavily, unlike many other dog breeds, you won’t need to be constantly vacuuming pet hair from your carpets and furnishings. This is also a good choice of pet if you have issues with pet hair.

Since Victorian Bulldogs also have a short and easy to manage coat, they require minimal grooming, reducing your time, effort and expense in this respect. Their coats are very smooth and rarely tangle, so this makes brushing a quick and simple job that you can easily accomplish yourself without the need to resort to going to an expensive groomer.

You should take care when bathing or showering your Victorian Bulldog, however. Since this breed is known for their sensitive skin and a high chance of skin problems, excessive showering will only exacerbate these problems and lead to uncomfortable allergic reactions.

Is a Victorian Bulldog For Me?

If you’re looking for a sturdy, loyal and athletic pet from bulldog lineage, a Victorian Bulldog is a great choice for you. Compatible with family life as long as it has been properly socialized and trained, this breed is a healthy, strong choice.

Can my Dog Eat Piriton?

We'd love to hear what you think in the comments section!

How Effective is Activated Charcoal for Dogs?

Are Sardines Good for Dogs?

Do Dogs Get Headaches?