The Kerry Blue Terrier is sadly now considered a vulnerable native breed but why? Read on to get the lowdown on this wonderful breed. 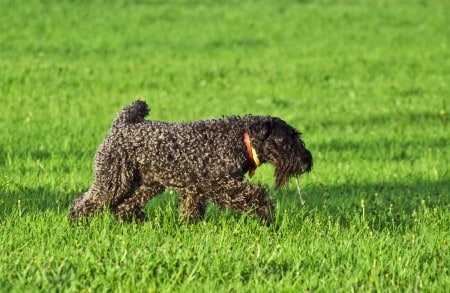 Here are the pros and cons of the Kerry Blue Terriers at a glance.

The Kerry Blue Terrier is a retriever, hunter, and herding dog from County Kerry, Ireland. This member of the Terrier family is a multipurpose working dog. Generally, they aren’t suitable for first-time owners due to their headstrong personality. Puppies also tend to be rowdy and boisterous whilst growing up.

Although the Irish Blue Terrier isn’t as rare as others in the Terrier family, they are still rather uncommon. The Irish Kennel Club has classed this canine as a Vulnerable Native Breed. Registrations with the IKC have significantly declined since their numbers peaked in the 1920s. 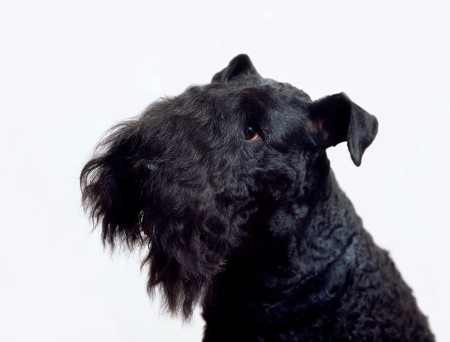 When it comes to grooming, the Kerry Blue Terrier will need lots of attention. Their fur hardly sheds and needs frequent brushing to prevent any mats and tangles from forming. It can be hard searching for a professional groomer that holds experience with this breed. Many haven’t come across this canine before.

Kerry Blue Terrier puppies are born black and as they grow, their coat color changes. Coat combinations are black, blue, grey, silver, blue and black and slate. Apart from their striking blue coat, the breed is noticed by other recognizable features. These include a beard, V-shaped folded ears and their athletic, muscular Terrier build.

Brocaire Grom is the Irish translation of the name ‘Blue Terrier’. They were used as farm dogs in the mountains of County Kerry, where they’ve been bred by locals since the 1820s. Back then, Kerry Terriers were popular and well-loved, featuring as the mascot for Irish patriots.

It is thought they were created by mixing the Soft Coated Wheaten Terrier and the Irish Terrier. The Bedlington Terrier was also added to the mix, producing the modern Kerry Blue Terrier we know today.

This canine was a multipurpose working dog used commonly on farms. They would hunt vermin and small game. Owners prized the Kerry Terrier for its rat catching skills. The breed could also retrieve game from both land and water. Despite the Terrier’s size, they were also capable of herding cattle and sheep.

By the 1920s, around 25% of Irish Kennel Club registrations were Kerry Blue Terriers. They were hugely popular at this time due to their working skills being in high demand. However, in today’s day and age, the Kerry Blue Terrier is now registered as a vulnerable native breed by the IKC.

The Westminster Kennel Club show saw the Kerrie’s first ever attendance in 1922. After the second world war, the Kerry Blue Terrier Association was created in the UK. In America, the AKC decided to recognize the breed in 1924.

Recommended: Read our guide about the Samoyed breed next here at Woof Bark Growl.

Kerry Blue Terriers need an owner that is dedicated to them! They will want to be by your side, receiving all the attention and affection you can give. Kerries are energetic by nature and have the stamina to be a jogging partner. The outdoors is definitely one of their favorite places!

Independence is something most Terriers have in abundance and the Kerry is certainly no exception! Occasionally, they may be stubborn, trying to force their own way. But a firm and consistent owner can iron that behavior out in no time. These are intelligent dogs that get bored quickly. They need purpose and something that can motivate them each day.

Kerries were used as watch and guard dogs when working on the farms. For this reason, they will be suspicious of those they don’t know. However, they should eventually settle down and relax to allow a stranger into the home.

Be sure to socialize the breed with new people in different locations. Aggressive behavior could develop out of fear. 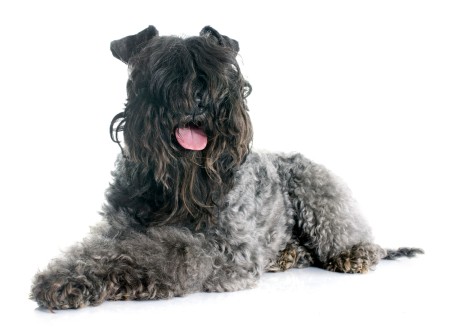 Yes, this breed is great with children, making a rather gentle companion. They have high energy levels and love playing interactive games such as fetch or frisbee. Children will make a great friend in the Kerry and will receive their protection and affection. This canine is known to make a great family pet.

Are Kerry Blue Terriers Ok With Other Dogs?

The Kerry Blue Terrier isn’t known for its friendliness towards other dogs. In fact, they may even become aggressive. Socialization is deeply important in preventing the typical Terrier attitude from shining through. Smaller dogs and cats can live peacefully with the breed, as long as they are introduced at an early age.

Ideally, this pooch will need up to an hour’s worth of exercise each day. Split the time into multiple walks. The Irish Blue Terrier is rather energetic and would be happier with a longer walk on the odd occasion. The breed loves a good chase so interactive games such as fetch would be highly enjoyable. 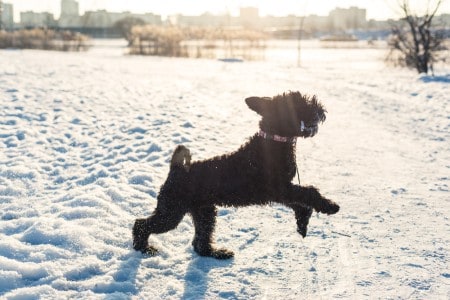 A strong prey drive follows the Kerry Blue Terrier. Ensure this breed is leashed at all times to prevent them from starting a chase. They’re also not very stranger or dog friendly. Secure fencing will be needed if a Kerrie has access to a garden. These pooches will happily wander off on an exploration.

Recommended: Our guide on the Lakeland Terrier is out now.

Check out the breed-related health conditions of the Kerry Blue Terrier below:

Kerry Blue Terriers are incredibly intelligent. You won’t have to offer repetitive commands to this pooch as they pick things up rather quickly. It’s their typical Terrier independence and head strong attitude that can hinder training for most.

Encouraging your pet to work for their rewards gives them purpose. Something the Kerry Terrier needs. Always keep training on the positive side. Food treats and affection are the most common rewards. Try to replace their food with a favorite toy when you can. The breed is prone to weight gain and obesity can cause serious health issues. 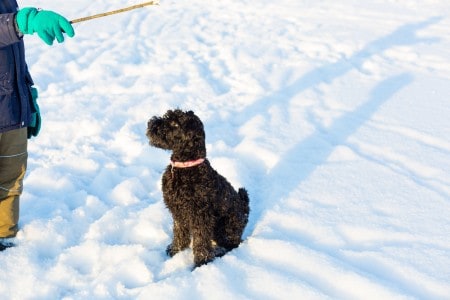 Like with most Terriers respect training is most important. Dominance and bad behaviors can lead them down an unruly path. Be consistent with your house rules and don’t let this pooch overstep the mark. Once you have gained their respect and certified your leadership, their listening skills should improve greatly.

Socialization is highly important for Kerry Blue puppies. It can have a big impact on how they treat strangers and other animals. Terriers are known to be fearless and won’t back down from a fight. It’s not uncommon for the Kerry to be dog aggressive. Socialization is relied upon heavily to turn them into the well-natured dog Ireland adores.

Recommended: Don’t miss this guide on the Bichon Frise breed if you are planning to own one.

The Kerry Blue dog hardly sheds its fur, making it an ideal breed choice for those who suffer from allergies. Regular brushing will be needed multiple times a week. If the loose fur strands aren’t removed, mats and tangles will quickly form.

Baths should be given every 6-8 weeks. Frequent brushing will minimize their need for a wash. Be sure all grooming products have been thoroughly washed out before removing them from the bath. It is best to towel dry the Kerry but a blow dryer can be used if preferred. Depending on if this pooch lets you use it! 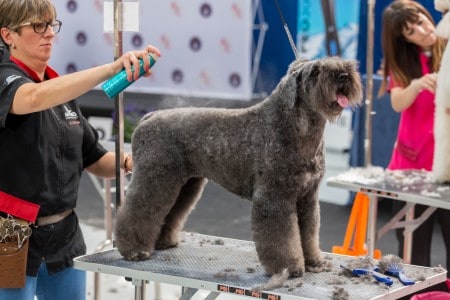 Kerries will need the fur on their body trimmed with scissors. Other areas of the body can be cut with clippers. The area around the anus will need trimming more for hygiene reasons. Some owners prefer to seek professional help, but this can be difficult. This breed isn’t very common and some groomers may not have come across them before.

A Terrier should have their nails filed weekly. The same goes for the ears. Cleanse them from any debris, clearing the ear canal from any excess strands of fur. Most vets recommend teeth are brushed daily. Owners should aim to do this at least three times a week. Introduce your grooming methods to a Kerry Blue Terrier puppy as early as possible.

We'd love to hear what you think in the comments section!

How Effective is Activated Charcoal for Dogs?

Do Dogs Get Headaches?